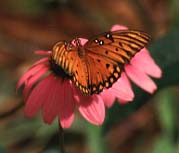 The loving interchange of help among members and daily reading of Al-Anon literature thus make us ready to receive the priceless gift of serenity.

Living With an Alcoholic

Is Too Much for Most of Us

Living with an alcoholic can be an overwhelming experience. Growing up in an alcoholic home can be completely devastating and can very well affect the rest of your life -- how you think, your attitudes, your concept of yourself and the world around you.

Having lived with the disease of alcoholism in my home for more than 43 years, I can understand some of what you may be going through. I have been there, too. I have felt the same frustration, anger, desperation, loneliness, pain, and helplessness that you probably have experienced.

But I finally began recovering from the effects that someone else's drinking has had on my life. As I began to learn to change my attitude about the problem, I found that it lost its ability to control and dominate my life. I have found a measure of serenity. You can find it, too, whether the alcoholic is still drinking or not.

But I did not do it alone. Only with the help and support of others who have traveled the path to recovery before have I been able to find that "priceless gift of serenity." I began that healing process when I walked into my first Al-Anon meeting.

For me, serenity began when I learned to distinguish between those things that I could change and those I could not. When I admitted that there were people, places, things, and situations over which I was totally powerless, those things began to lose their power over me. I learned that everyone has the right to make their own mistakes, and learn from them, without my interference or assistance!

The key to serenity is acceptance. But "acceptance" does not mean that I have to like it, or condone it or even ignore it. What it does mean is I am powerless to do anything about it... and I have to accept that fact.

I spent years trying to change the alcoholics in my life. I threatened, scolded, manipulated, coerced, pleaded, begged, bribed and generally tried all I could to make the situation better -- only watch as the situation grew progressively worse. For me, acceptance came when I finally realized that I was dealing with a disease. Somebody told me, "You can't argue with a disease." That helped me change my attitude about the problem.

What the Al-Anon Family Groups did more than anything else, was impart wisdom that I could never have discovered on my own. The "program" gives me the tools that I need to take back my own life and begin living again. I learned to use the slogans, the literature, the 12 steps, and every opportunity to hear the experiences of others.

Really, it was just "little" things. Small bits of wisdom that had never occurred to me before. After awhile, these small bits of understanding began to build up into a new way of thinking -- about myself and the world around me.

I was amazed how simple the recovery process was -- simple but not easy! I began to rely on the simple wisdom of the program as I understood it. That wisdom keeps me coming back, week after week, to the meeting rooms. And helps me maintain a measure of serenity no matter what may be happening with others in my life.

Sometimes the only thing that we can change about the problem is our attitude about the problem. But the Al-Anon program taught me to take a hard look at myself and the part that I was playing in contributing to the family problem. When this was done, I came to the conclusion that I needed to change --and change sometimes requires courage.

One thing I changed was I stopped lying about and covering up the situation. For the first time in my life I was able to talk about what was really going on in my life. In Al-Anon, I found a safe place to do so.

I found out that I was not alone; amazingly there were others, many others, who had been down the same paths I had walked. As I listened to their stories, I began to draw from their experience, strength and hope. But I will never forget how I felt when I first walked into that room. I felt that I had finally found a group that "understood as perhaps few others can" what I was going through.

Recovering from the effects of alcoholism is a process, not a one-time event. I didn't get in the shape I was in overnight, and I couldn't expect to recover from it instantly either. But that process did not begin -- and never would have begun -- had I not decided to pick up the phone and find -- an Al-Anon meeting.

I can still remember my first meeting. I saw something there that I wanted in my life. It was in the eyes and faces of those people in that first room. What I saw was hope and serenity. I knew that I needed both in my life. I decided to "keep coming back."

The only qualification for membership in any Al-Anon Family Group is that there be a problem with drinking in a relative or friend, whether the drinker in question is an alcoholic or just a problem drinker. If someone else's drinking is a problem for you, find -- An Al-Anon meeting nearby. There you will find people who understand as perhaps few others can.